PUBLISHED BY ANURAG MALLICK AND PRIYA GANAPATHY ON THEIR BLOG redscarabtravelandmedia.wordpress.com | SEPTEMBER 6, 2020

Once the capital of Maratha queen Ahilyabai Holkar, Maheshwar looms above the languid waters of the holy Narmada, enfolding within itself history, heritage and fascinating mythologies, explore ANURAG MALLICK and PRIYA GANAPATHY

It was evening by the time we reached the pilgrim town of Maheshwar. At the banks of the sacred Narmada we watched the incessant flow of walkers, pilgrims, bathers, wrestlers and locals. The symmetrical steps of the Ahilyeshwar temple looked familiar – it had served as a scenic backdrop for movies like Padman and Yamla Pagla Deewana! The ghat was dotted with stone Shiva lingas and temples along the riverbank – Til Bhandeshwar, Kashi Vishwanath, Narmada Mata and the chhatri (samadhi) of Rani Ahilyabai.

Between 1766-95, Maheshwar served as the capital of Maratha queen Ahilyabai Holkar. Stopped from committing sati by her father-in-law, she ruled for nearly three decades from her royal seat until Malhar Rao Holkar III shifted the capital to Indore in 1818. High above the ghats, her 250-year-old Ahilya Fort loomed above the Narmada as we caught the last rays of a pink sunset on its languid waters. A yogi, his arms tucked behind his head and legs folded in padmasana, languidly drifted along the current.

Time flowed unhurriedly like the placid Narmada. We witnessed the devout engrossed in evening rituals as the Kashi Vishwanath arti at 7:40pm was soon followed by the Narmada Maha Arti at 8pm. The priest of Narmada Mata Mandir narrated fascinating legends about the river and the city she coursed through. Born from the sweat of Shiva, Narmada is hailed as Shiv-putri or Shankar’s daughter Shankari.

Maheshwar is thus sacred to Shiva and his imprint can be seen everywhere. Pebbles on Narmada’s riverbed are shaped like a linga (called banalinga). Some say she is both nar (male) and mada (female); others believe she is called narmada because she is narm (soft), bestowing a feeling of peace on the beholder. Her popular name Rewa is derived from rewati or her leaping motion through the rocky bed. 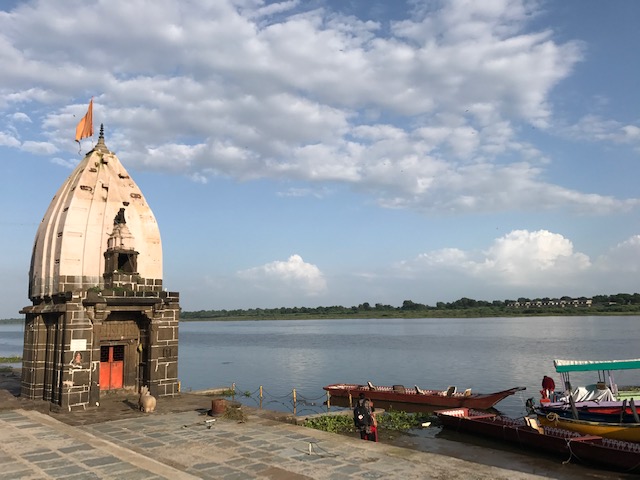 “Jagat janani, jeevan dayini, wo ajar-amar hai. Sansaar nasht ho jayega, magar Narmada hamesha behti rahegi…” “She is the fountainhead of the world, the giver of life, she is immortal. The world may come to an end, but Narmada shall continue to flow,” explained Pandit ji. “She has other names too”, piped in the others. “Sonsursa, Mahti, Krapa, Mandakini, Mahanawa, Vipapa, Vipasha, Vimala, Namrata, Karbha, Ranjana, Trikuta, Vayuvahini, Dakshinganga.”

Maheshwar was once Mahishmati, founded by king Mahishman and later the capital of thousand-armed king Sahasrarjun. One legend recounts how the king went to the river for a picnic with his 500 wives and blocked the mighty river with his arms so that his queens could frolic in the waters! Meanwhile, Ravana who was flying by in his Pushpak Vimana stopped at the dry riverbed downstream and fashioned a sand shivalinga for his daily worship. 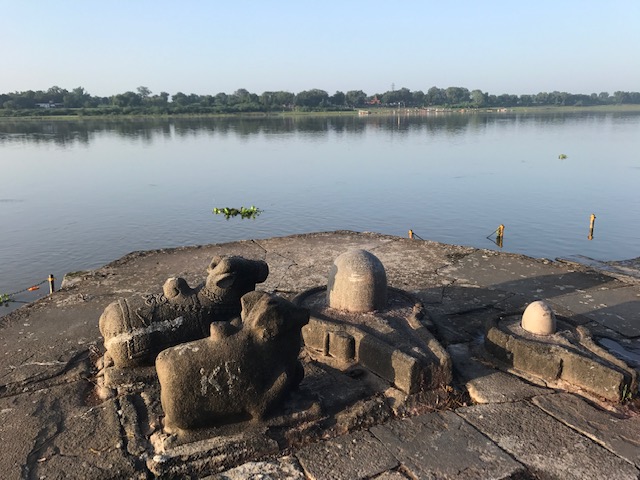 When Sahasrarjun finally lifted his arms, the gushing waters swept off Ravana’s shivalinga. Furious, he challenged Sahasrajuna to a duel but was pinned to the ground by his 1000 arms. Sahasrajuna placed 10 lamps on Ravana’s heads and one on his hand, bound him and dragged him to the palace and tied him to his son’s cradle, where Ravana remained a prisoner until his release. Even today, the Sahasrarjun temple at Maheshwar lights 11 lamps to commemorate the legend.

Our driver, who had been restlessly shadowing us, politely asked if now we would like to go to our hotel. We laughed and walked up the steps to Ahila Fort. Set amidst gnarled neem and frangipani trees, Ahilyabai’s rajwada (palace) had been beautifully restored into a fort hotel by her descendant Shivajirao or ‘Richard’ Holkar. 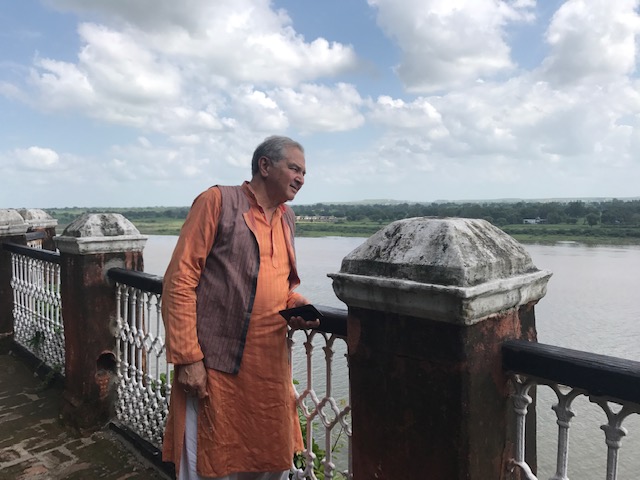 Parisian online magazine ‘The Style Saloniste’ called it “The Far Pavilions and The Jewel in the Crown with a dash of Gandhi idealism”. We were chuffed to know that we would join an elite list of celebrities that had stayed at Fort Ahilya – Mick Jagger, Ralph Fiennes, Lord and Lady Cavendish and Prince Michael of Greece (and Denmark).

In the inner courtyard, Kuntabai, who has been with the royal family for over thirty years, led us to Kachnar, our room on the first floor. Interestingly, the rooms were named after the surrounding trees – Imli, Elaichi, Champa, Badam, Gulmohar, Haldi, Kesar. The best rooms were the lavish river-facing Narmada Suite done up in muted greys with tasteful colour accents and the Nagarkhana Suite, the old drumhouse in a gateway overlooking the Ahilyeshwar Temple. 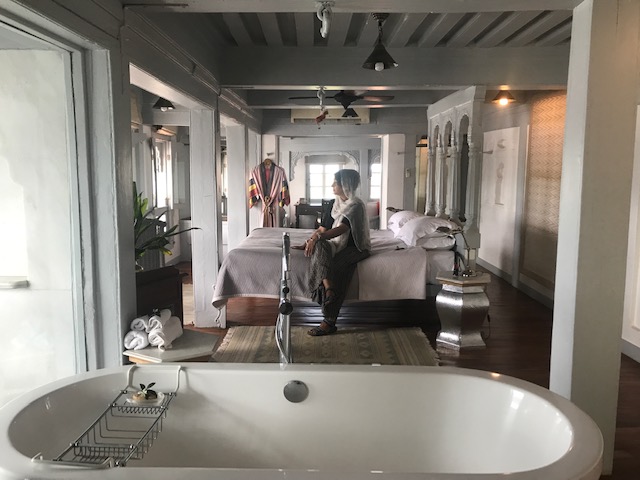 “Richard ji will see you for supper at 9pm sharp,” the instruction was as crisp as the linen. The stress on ‘sharp’ was enough to ensure we were well on time. Clad in a simple Maheshwari kurta pyjama and Nehru jacket, ‘Richard ji’ was disarmingly informal. We discussed our recent travels through Madhya Pradesh and talk drifted to local food – the succulent balam kakdi, the tangy khorasani imli and the black coloured country chicken Kadaknath.

Author of ‘Cooking of the Maharajas’ in 1975, Richard often joins guests for conversations over a drink or meals and personally curates the home-style food at Ahilya. Dinner was announced by the drumbeats of the dholak with customized printed menus – mushroom pulao, spiced tomato and green gourd, grilled mahi mahi, crispy okra, capsicum raita, chapattis and vermicelli kheer. 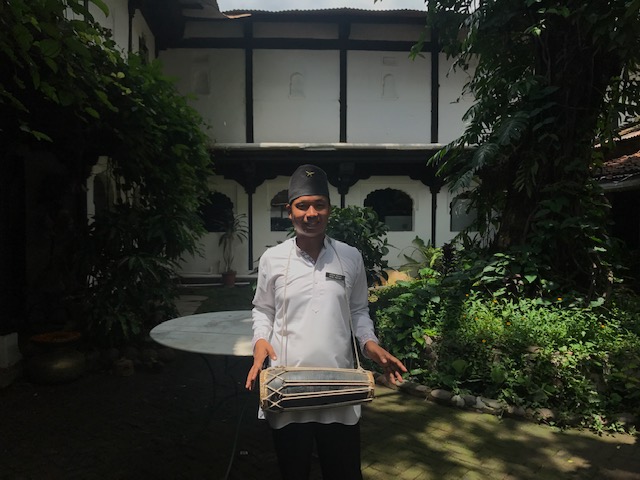 The next morning, we woke up fashionably late, to the sound of the Lingarchan puja performed daily at 8:30 am at the royal family shrine just below the terrace. The sacred ritual was initiated by Ahilyabai Holkar in 1766 for the well being of her subjects and involved shaping river mud into 1300 miniature Shiva lingas on a wooden board, which was ritually immersed into the river.

An elaborate breakfast awaited us at the Poshak wada – bacon, sausages, baked beans, Maheshwari style scrambled eggs, walnut and sunflower seed bread, with the fort’s jams and citrus preserves made by Richard. We even got a taste of the legendary Batteesee Chatni, a secret recipe of 32 ingredients that Richard will never part with. Ambling around the sprawling hotel, we discovered charming nooks under bougainvillea creepers – a hidden turquoise pool, herb garden and the quirky ‘Le Loo’. 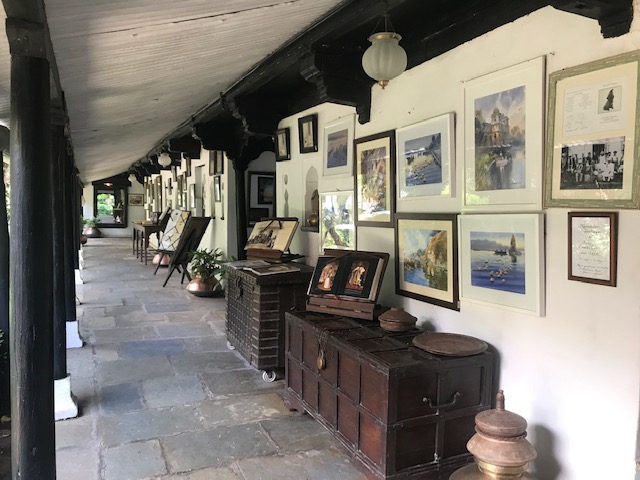 Lined with wooden pillars, the hallways held a treasure of antiques besides sepia tinted photographs of the Indore royal family and their mansions. The walls exhibited ethereal paintings of Maheshwar by late artist-in-residence Harry Holcroft and riveting prints by photographer Ashish Dubey capturing the many moods of the Narmada. A portion of the sales went towards the Ahilya Fort Wall Project.

The Maheshwar Rajwada serves as a museum on the Holkar lineage and a map marks out the pious queen’s sacred deeds at India’s holiest sites – renovating temples, dharamsalas and ghats from the Himalayas to Mathura, Brindavan, Dwarka and Puri. Locals and the devout often walk into the fort to pay homage at the queen’s statue.

We visited Rehwa Society, a weaver’s cooperative for local women. The clatter of looms mingled with the incessant hum and chatter of kids next door at Ahilya School, founded in 1979 for weavers’ children. Maheshwar’s weaving tradition goes way back to the 5th Century.

However, weaving as a large scale occupation gained prominence during the reign of Rani Ahilyabai Holkar (1767-1795) when she invited master weavers from Surat and South India to create traditional Navvari or Maharashtrian nine-yard saris and turbans as mementos for royal guests. 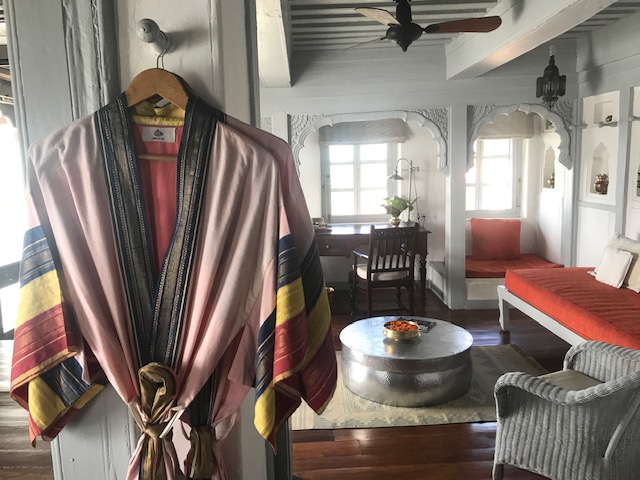 The craft languished till the 1970s when Richard Holkar and his former partner revived the centuries-old tradition of Maheshwar weaving. Today, weaving is the mainstay for over 700 local families. At Rehwa Society alone, 70 ladies and a few men worked in shifts. They showed us the intricacies and typical designs that made Maheshwari weaves so popular.

“Weaving one sari could take 3-10 days, depending on its complexity. Some pallu designs could take 3-4 days,” they explained. The in-house store was a rainbow of colours. All around town the inner bylanes reverberated with the constant clack of looms as shops sold kurtas, shawls, saris and stoles.

The town is dotted with temples. The Rajarajeshwar temple has a ceiling full of mirrors and coloured glass. Smaller shrines dotted the complex and the path continued to Gobar Ganesh temple displaying an idol made of gobar (cowdung). We completed a radial circuit back to Ahilyeshwar temple, with the chhatri of Vithoji facing the elevated Shiva shrine.

The inner courtyard had beautifully sculpted statues of musicians, dancers, apsaras and even two gentlemen in English costume! Marble slabs on the stone steps marked the water level during two big floods – 6 September 1944 and 17 September 1961. 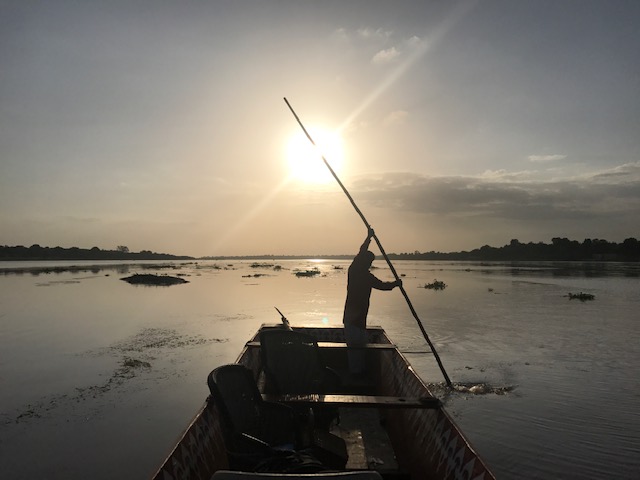 Boatmen of the Ma Rewa Nauka Vihar Kewat Samaj Samiti offer boat rides to Sahasradhara and Baneshwar. Gliding past the riverside temples and the fort, we took a leisurely ride to Baneshwar Mahadev, located on an islet midstream and returned by sunset.

That evening, we left the palatial Ahilya Fort for the humbler comforts of the renovated gatehouse – Labboo’z café and lodge. The odd name came from the family driver who initially ran it – Lakshman aka Lambu (the tall one), mispronounced as Labbu by Richard’s kids! Its five rooms were named after birds commonly seen around the lodge.

We headed to the topmost room Bee Eater above the main fort doorway overlooking the ramparts and a private terrace. Inside, cute alcoves on either side served as luggage racks, seaters, wash, shower and a secret toilet behind a blue door! The blue-grey tiles and Kashmiri embroidered linen from Richard’s mother’s collection added a cozy touch. Large cement steps led to another terrace, perfect for stargazing. We sank into the cane chairs under trees with book-lined alcoves and sweet, ever-smiling staff.

Food was mostly vegetarian snacks, perfect for a short bite. But we had been spoiled silly with Ahilya Fort’s hospitality. Richard’s voice echoed in our ears “It’s called La-Booz, but there’s no booze there. For that, you have to come to the palace!” And so we returned for some more fried parval (pointed gourd), a sip of champagne and unhurried conversations in the history-scented fort. We could try the Maheshwari maalish (massage) tomorrow or perhaps take the boat ride from Mandleshwar to Maheshwar? Like the leisurely river cruise, life in Maheshwar drifted ‘slowly down the Narmada.’

Getting there:
Maheshwar is 95 km/2 hrs southwest of Indore. Mandu and Omkareshwar are just 1.5 hours away.

Discover This: Maheshwari Saris
In Maheshwari saris, silk thread is used in the tana (warp) and cotton in the bana (weft), which imparts a silken sheen and a light, comfortable drape – ideal for the region’s hot climate. However, the uniqueness lies in its weave. The body is checked, striped or plain but the striped pallu and border designs are inspired by traditional or architectural temple motifs. Each design has a specific name – rui phool (cotton flower), diya (lamp), chameli (jasmine), hans (swan), aari (wood saw), jugnu (fireflies), baadal (clouds), jharoka (lattice windows), iint (brick), chatai (mat) and heera (diamond) A wavy border pattern is called ‘Narmada ji’ or leheriya inspired by the river’s ripples…

is added to your shopping cart.

Close
Limited-Time Offers, End in:
Close
Back to top