Her husband had just been killed in battle. Devastated, the young queen of Malwa, Ahilyabai Holkar was about to perform sati - throw herself on her husband's funeral pyre - when her father-in-law Malhar Rao Holkar begged her to stop. He was an old man and he needed help running the kingdom. So she decided to live after all.

She'd been an impressive young girl who the king had met by accident. He was so taken with her character that he had arranged her marriage to his own son. She proved to be a very quick study and was relied on by the king and his son, who had taken over the rule of Malwa when he was killed in battle. During the 12 years that she ruled with Malhar, she was trained by him in administrative and military matters. He trusted her even to lead armies: "Proceed to Gwalior after crossing the Chambal. You may halt there for four or five days. You should keep your big artillery and arrange for its ammunition as much as possible. On the march you should arrange for military posts being located for protection of the road." The royal family still occupies the fort soaring above the ghats of the Narmada river, which was built by Akbar way back in 1601. For Ahilya, it was a convenient and secure place to run an empire stretching all the way to Indore. For thirty years she reigned over the kingdom of Malwa. Under her care the arts flourished, she built countless temples, dharmsalas, roads and water wells for the people. Ahilyabai is still a local legend, you see shrines to her everywhere in the region.

Given the prosperity encouraged in the kingdom under her rule, threats from invading armies would of course be the status quo. They were successfully fended off, often by the lady herself leading the charge. The Peshwa of Pune reportedly challenged Ahilyabhai to a battle from the other side of the river. The queen told him that she and her all woman army had no problem in fighting but she warned him about the embarrassment he'd face if he lost to the women. The queen's followers claim the Peshwa retracted to never come back. 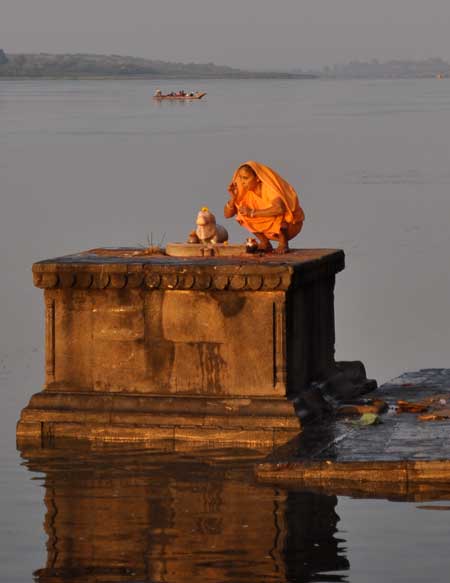 Ahilyabhai was not only a tough cookie, but she was a generous patron of the arts. Luckily for the world, she also loved sarees and in 1760 sent for the famed weavers of Surat to enrich her kingdom with fine cloth - something worthy of the royal family. Under the princely state the weavers arts flourished and specialized into the present day Maheshwari cloth. Once an all cotton weave - in the 1950's silk started being used in the warp and slowly became the norm.

The early morning light illuminates a woman's puja, the sun beaming golden into her Maheshwari sari. One easily gets lost in time here, only the growing heat of the sun reminds you of time gone by. The atmosphere at the ghat is so incredibly peaceful in the morning hours - it somehow has all the charm of Benaras without the crowds and pollution. The Narmada river , unlike any other in India, flows east to west through Madhya Pradesh Shrines and Linghams are all over the ghat, faced by nandas in white marble gleaming in the sun.

The growing industrialization of the 20th century was cruel to the Maheshwar handlooms. Fashion whims were looking elsewhere, and simple traditional things got tagged "old fashioned". By the 1970's the Maheshwari sari was being threatened with extinction. Many weavers, facing utter destitution had fled to Mumbai looking for work but ended up having to slave in mills to afford life in a slum. In 1978 a seventh generation son of Ahilya Bai decided to do something to revive the craft he saw dying in front of his eyes. He started the Rehwa society - a weaver's collective that would give fair wages and benefits to the weavers. The Holkars used their money, influence and charm and with the help of his American wife, hob nobbed with designers, artists and actors, shaking the world back into taking notice of these wonderful textiles. By empowering the crafts people with fair pay, education and medical coverage, they have brought the life blood back into the craft. They have not only helped their own crafts people, but independent weavers are also back in business in Maheshwar. "You'll pay more at the fort," one merchant said, "The Rehwa society asks 50 - 70% more for their sarees to pay for the social costs of the members."

The view inside the Rehwa weaving center with the big neem tree in the airy central courtyard.

Because of their efforts and the skills of the local weavers to take back their crafts, Maheshwar is thriving, looms are clacking everywhere and the cloth is moving in markets all over India and abroad. The Holkars have just revived some old style sarees by copying coveted vintage pieces in private collections. Demand is great for the real traditional look again.

Sadly in Maheshwar, like most of small town India, you see only the usual garish poly sarees on the local ladies. But sari shoppers like to come to Maheshwar, also a beautiful pilgrimage site on the banks of the Narmada river, so there are constant buyers coming to support quite a few nice shops in the town selling the handlooms.

Maheshwar has a beautiful peaceful vibration. The ghats remind one of a small Benaras. Going through the fort, the steps down to the river take you by the Rehwa weaving center. It employs around 250 weavers, the majority being women. Especially widows from all communities and religions are given employment. The building is in the fort itself, housing 110 looms in the airy open layout. The weavers enjoy the cool breezes off the Narmada river wafting through the huge Neem tree shading courtyard. The clickety-clack of fly shuttles speeding too and fro and the quiet peace overlooking the river and ancient Shiva temple is almost too much. One could swoon. Rehwa is the old name of the river, it feels so right.

In this photo you can see the Shiva Temple inside the fort and the white building is the Rehwa weaving center This is definitely Shivas place, shrines and Linghams are all over the ghat.

The Looms of Maheshwar 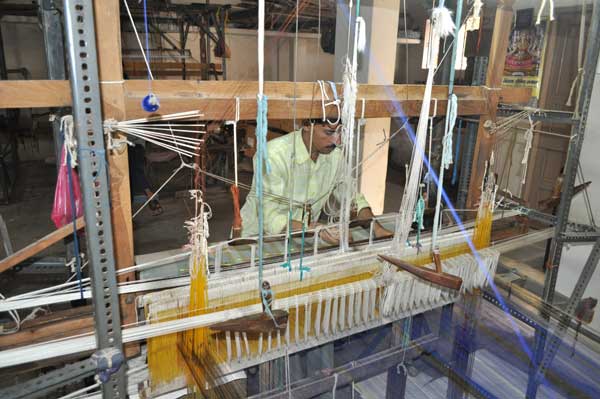 The Maheshwar loom features fly shuttle, supplementary string heddles to make the butta and dobby machines for the border patterning. Maheshwar borders are very geometrical with fine chevron lines and diamonds. The Naka, or string heddles are suspended from separate posts and are stretched across the work like a tennis net. A set of knots in front of the weaver lifts the proper pattern line in sequence. Since it is a string that sags down from the center, the wooden hammer like hooks hanging from above secure the shed open and clean, when inserted under the strings. The butta are put in by hand with bobbins of thread and most often, zari. The naka shed is released and a row of plain weave goes in between the rows of the butta work. It is all too clever! The weavers work on the back of the cloth and always have the work covered by some cloth to protect it from snags and dirt. 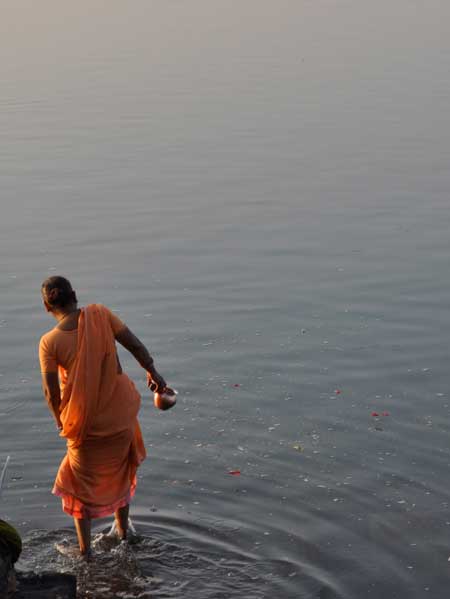 The classic Maheshwari is a silk/cotton with narrow zari border. The warp is fine silk yarn bought from Bangalore and Benares, the weft is super fine cotton yarn from Coimbatore. This is a cloth developed for royalty, and you look and feel like one when you wear them! 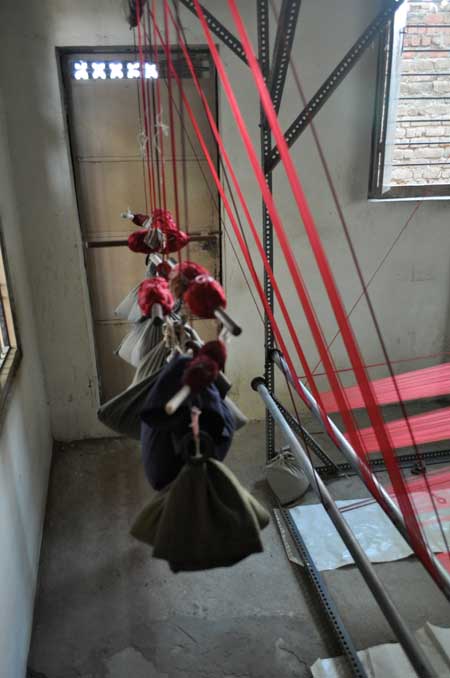 The typical tie up for the warp threads. Divided into equal sections each with a heavy weight attached, the warp threads are fed over what look like bicycle hubs. As the cloth progresses the warp threads, wound around a peg are unwound a bit and tied off. Appropos cycling, there are parts of bicycles in use all over a typical weavers - so practical and inventive. 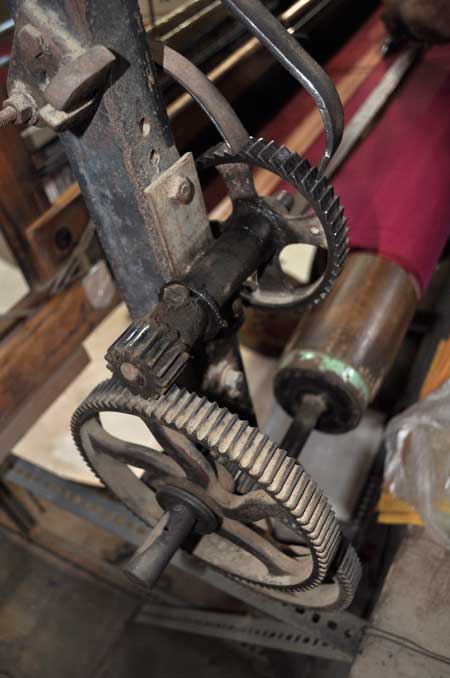 This loom was set up for weaving plain cloth as you can see in the photo. Some of the looms have these groovy cloth advancing gears that with every stroke of the beater winds a tiny bit on the cloth beam. Every loom here is a bit different than the next. These looms were in a special commercial building that housed six large looms. Many of the home looms are pit style. Along with sarees, dupatta, suit materials and plain cloth are woven here - there are takers for these products in markets all over the country. The fine airy cloth is perfect for the hot Indian summers and because of the silk content the cloth floats above the skin, giving a very airy feel. 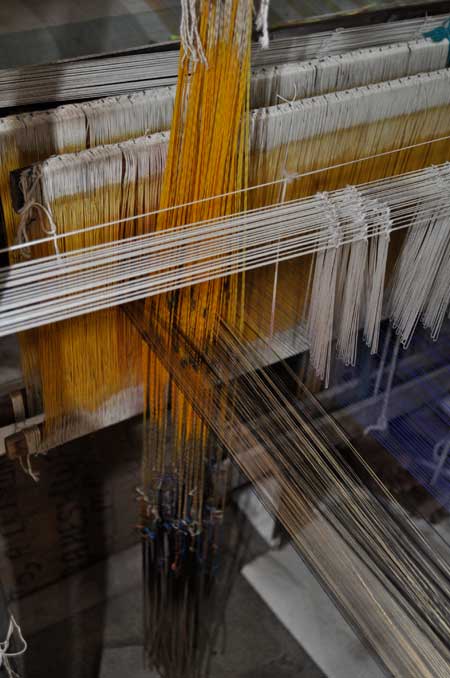 The patterning heddles and set of naka (thread tie ups) for the butta sit in front of the main heddles. The dobby tie ups come through and attach to the border threads. These tie ups are weighted with thin pin weights, one weight for each pick. Quite some tying up. When the weavers have finished weaving the entire length of warp, which in Maheshwar varies from 8 to 12 sarees, they leave the sleyed ends. Then a new set of warp threads is carefully knotted to the old threads and the sleying gets done in one pull back through the heddles, naka and border pattern eyes. They use rakh, or ash from cow dung to expedite the tying process, which goes amazingly fast over the width of 4000 thread ends! 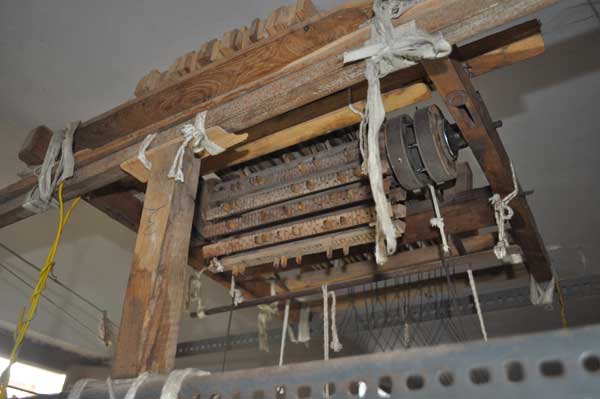 A little dobby'll do ya. These are the only patterning devices you see in Maheshwari, old style dobby machines that create the border patterning. Some enterprising hand weavers tried to bring power looms to the region to try to up their profits - but because of constant power cuts the scheme failed. Maheshwar has applied for a Geographical Indication for it's cloth. This copyright will stipulate that anything sold as Maheshwari cloth MUST be made by handloom only. So we are safe at least for a while. 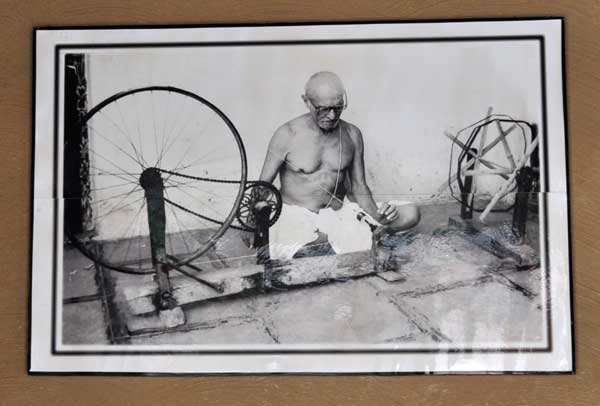 Above the father at his spinning wheel and below the son, running a large operation of looms. The warp cotton yarns come pre died from local vendors in the village who get them from Coimbatore yarn merchants. The silk comes from Bangalore and the weavers often dye it here themselves or more often than not, leave it's natural golden color, which gives the luscious golden b color to these sarees.

This is approximately a two months supply of chilis for this family of five. That is a lot of chili. They were cooking our food for us but as far as my thali was concerned they were merciful.

is added to your shopping cart.

Close
Limited-Time Offers, End in:
Close
Back to top